When sending flowers, you always have the choice of whether to send them with a signed card or anonymously. Anonymous flowers can create an air of mystery, which can be fun for couples who are falling for one another but not necessarily “Facebook official” yet. Signed flowers, meanwhile, ensure that the recipient knows who exactly sent the gift. 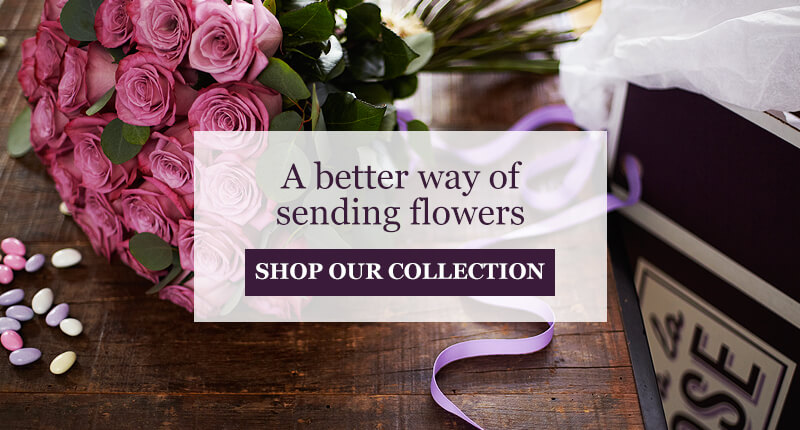 Both options have their pros and cons, and both can be ideal in different situations. In some cases, sending anonymous flowers can go past “cute” or “mysterious” and become creepy. How do you know where the line is so that you don’t cross it accidentally? Below, we’ve outlined a few situations where it would or would not be appropriate to send flowers anonymously.

Scenario number one: You have a crush on a girl who you have only talked to a few times. She recently ended a long-term relationship and is visibly heartbroken about it. You want to make her feel better and let her know that she is special, so you send an anonymous flower gift.

Cute or creepy? Creepy. You can’t have genuine feelings for someone if you’ve rarely spoken to them or spent any real-time with them. Sending flowers in this scenario will either creep her out or cause her to think that her ex is trying to get back together with her. Either outcome is bad.

Scenario number two: You have a crush on a girl who you have been spending a lot of time with recently. The two of you have been out together on unofficial dates, text each other regularly, and clearly, enjoy each other’s company. You are ready to make the relationship official, and have maybe even just asked her out on your first true “date.” You send anonymous flowers to her home on the morning of your date—a gesture you hope she will find playful, romantic, and cute.

Cute or creepy? Cute! She will know who sent the flowers the moment they arrive, but the anonymous nature of the gift will add some romantic mystery to your budding relationship and increase her anticipation for your date.

Scenario number three: You and your wife are celebrating your tenth wedding anniversary. You have a big date night planned, but want the whole day to be special. You send her a bouquet of flowers at work signed “Love your secret admirer.”

Cute or creepy? Cute. She will know the flowers are from her husband, but the “secret admirer” bit will add a bit of sexy mystery to the special day.

Related Post: Should I Send Flowers to my Crush? 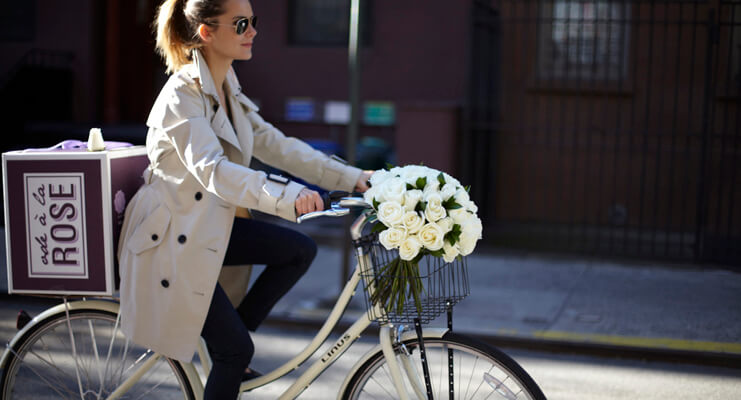 It may seem like the point of anonymous flowers is that the recipient doesn’t know who sent them. However, the idea of having a genuine “secret admirer” is a lot creepier and more worrisome these days, especially for a woman. Sending anonymous flowers, therefore, is most romantic among couples who are either dating (or married) or in the courtship phase. Otherwise, it can come across as creepy or even cowardly. Take the first scenario above: the guy would have been much better off just talking to the girl and being nice to her, in person. Instead, he hid behind the shield of anonymity, and it backfired. Don’t make the same mistake with your crush.

Be Bold! Deliver Your Flowers in Person

There’s nothing better than someone you admire handing you a bouquet in person. So, be that person! By delivering flowers to your crush yourself, you’ll avoid any mixed signals or feelings of fear and stress. If you know someone and think they would appreciate flowers from you, we encourage you to take charge of the situation. You are brave enough and confident enough already. The fact that you’re thinking about sending anonymous flowers is sweet, but sending them yourself will be even sweeter.

If you’re feeling nervous, that’s a good sign — it means you’re a normal human. Putting yourself out there into a potentially uncertain situation can be nerve-wracking. But you never know how things will work if you don’t try. Even if your plan doesn’t go as you’re picturing it, it won’t be the end of the world. Some girl, somewhere out there, is waiting for you to give her flowers.

Choose to Add a Note

If you do decide to go with the “sending flower from a secret admirer” plan, you should include a note. Writing a well-thought-out message will help minimize any feelings of worry.

At Ode à la Rose, you can select our “include a note” option with your order. This way, your crush will have some context for who’s sending her flowers.

The Best Ways to Sign a Card When Sending Flowers

If you still want to send flowers in disguise, but you’re also wondering “is sending anonymous flowers creepy?” We recommend this: write a few lines that leave hints as to who you might be, or how you know the girl. To avoid sounding creepy, steer clear from writing things like “I’ve noticed you doing….” or “I’ve been following you to see you extra.” Those lines will not go over well at all.

There’s no harm in doing either of those things, but imagine if someone sent you a note with that language? It would probably seem a bit creepy. We don’t want you to do that by accident.

If you’d like, you might consider including a line about not wanting these flowers to seem creepy, but that you’re still too shy to go up and talk to her in person. That way, whoever it is you send flowers to, will know you’re someone she knows.

Send the Right Flowers to Your Crush Or Loved One

Once you’ve made up your mind about how you’re going to send flowers to your crush, girlfriend or wife, the next most crucial step awaits you: choosing the best bouquet. Sending the right message is important! The following flowers are some of our top sellers:

If You Want to Send Anonymous Flowers, Try These: 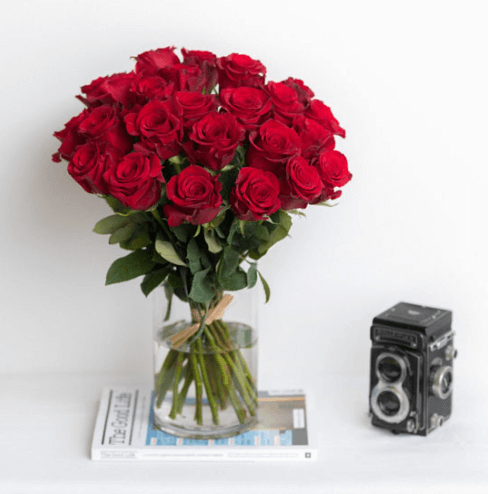 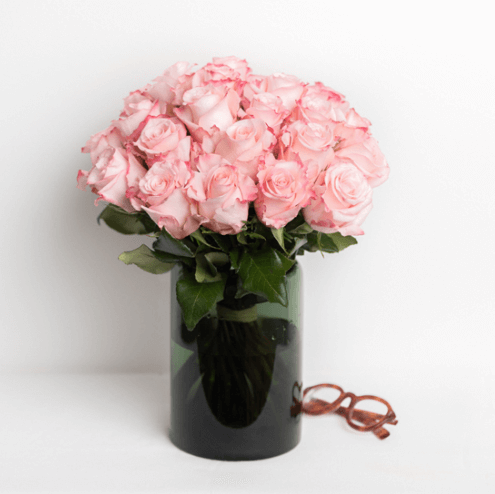 On behalf of Ode à la Rose, we wish you luck on either sending anonymous flowers to your crush or delivering them in person.

We’re a unique flower delivery company. We offer same day delivery in the bustling neighborhoods of Manhattan, Chicago, Philadelphia, Lost Angeles, and Washington D.C. and next day delivery in most cities in the Northeast. This is our blog. 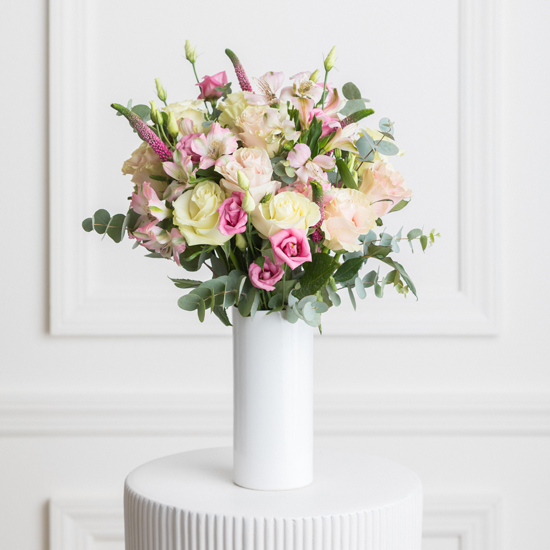 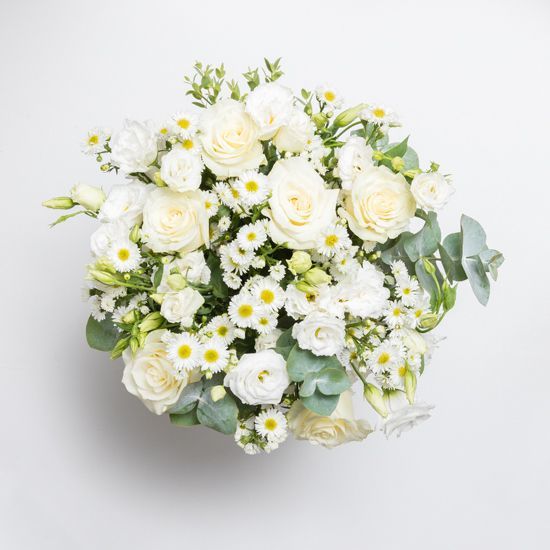 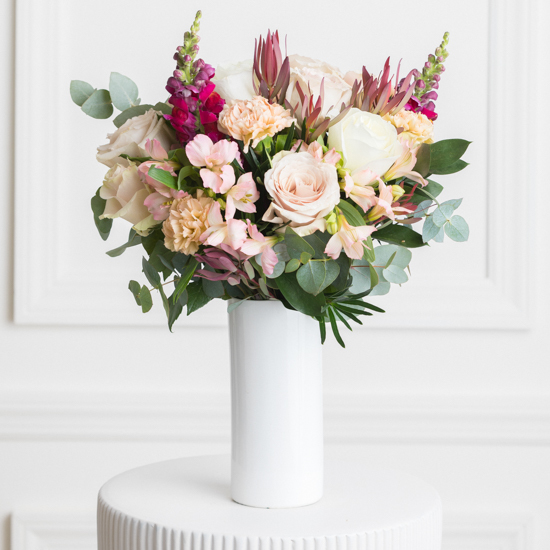 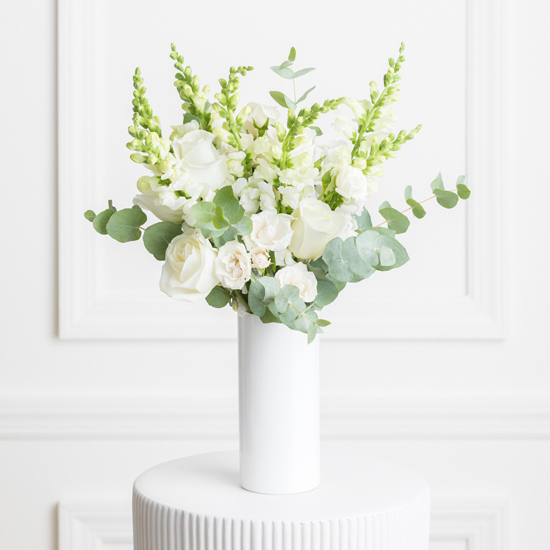 Latest creation from our LA team for a special eve

Our Spring wall in perfect sync with today’s wea