Which Flowers to Buy for Every Anniversary

When you have an anniversary coming up, you want to get a sweet and sentimental gift. While every wedding anniversary has a symbol associated with it, anniversary flowers are a classic and romantic gift. You can even customize the floral gift to fit in with the milestone you and your partner are celebrating, but it helps to know which flowers to buy for every anniversary and how to choose the best anniversary flowers.

How to Choose the Best Anniversary Flowers

Any marriage anniversary is a momentous occasion. You want to find the perfect gift every year to mark the plentiful milestones of your relationship together, so say, “Happy anniversary” with flowers. When you order anniversary flowers, consider:

You and your spouse are approaching the one year anniversary of the day you started your lives together. This anniversary marks the end of the first year of growing together and adjusting to your new life. Choose a bouquet that features one of these flowers for a lovely first-anniversary gift:

Gold and yellow are colors associated with the first wedding anniversary, so try to choose flowers that reflect those warm shades. Yellow is an optimistic color that represents how hopeful you are for you and your spouse’s future, celebrating your first anniversary with cheerful flowers.

If you choose a flower other than an orange blossom or pansy, carefully consider your choice. Yellow roses, for instance, are bright and beautiful, but they have more associations with friendship than romantic love, meaning it’s not the best choice for first wedding anniversary flowers. You can also choose an arrangement of dendrobium, a variety of orchid that has white blossoms that are somewhat similar to an orange blossom but with more texture.

Because the first wedding anniversary gift is paper, attach a lovely note to your floral gift expressing your love and excitement for what the future holds.

To celebrate your second anniversary, give your significant other the gift of cosmos. These flowers come in an array of colors that are all cheery, sweet, and romantic, like pink, orange, yellow, white, and red. Cosmos have a daisy-like look with oval petals and a yellow cluster in the center that gives the blossom a pop of optimistic color.

Choose cosmos in a red or maroon color to evoke the passion and romance you and your partner have for each other. Red is the color of the second anniversary thanks to its warm and fiery feel that reflects intense love. By the second year of marriage, you and your spouse could still be in the honeymoon phase as your love is still new and intense. Red cosmos combine that feeling and the sweet innocence of a young relationship.

Tie a cotton bow around the bouquet or the vase to help evoke the material of the second anniversary. Cotton represents the comfort you’ve developed around each other, along with the durability of your relationship. When paired with red flowers or cosmos in every color, you show how strong your bond has become while still maintaining all the love and passion you felt on day one.

Your love is still going strong as you reach your third anniversary. You’re becoming more comfortable and establishing your life together, and to reflect that with a token of your love, choose fuchsia. These flowers evoke confidence and trust, which you have developed for each other over the three years of your marriage.

These flowers are known as “earrings of the Queen” or “lady’s ear drops” for the way they gracefully hang from their stems. Fuschia generally has some more open petals in one color, like light pink or the vibrant color named after this flower, and a bell shape of petals in a different color, like white, purple, cream, and others.

The material for the third anniversary is leather to symbolize warmth, strength, and flexibility that your relationship has gained over time. You might be able to find leather accents for a flower vase, but you can always incorporate the more modern crystal into your third-anniversary gift. That modern style will go better with the whimsical look of fuschia flowers.

Your relationship is blossoming as you approach the fourth year of marriage, so a bouquet of wedding anniversary flowers is more than fitting. For a floral gift that your spouse may have never received before, consider geraniums.

Colors of romance characterize geraniums, with pink, purple, red, and fuchsia colors. Sometimes, geraniums feature white or dark accents and often come in stems that look like a cluster of smaller flowers.

A geranium also represents the unexpected that comes through with fantastic color and texture. That unexpected appearance mirrors the future that you and your spouse will dive into as the years pass. It’s also a unique flower that helps commemorate an anniversary that couples may not celebrate as much as others.

The most common color for daisies is white, as that reflects ideas of innocence, but you can find daisies in a rainbow of other shades. If you’d like to go by the colors of this milestone, select flowers for your fifth wedding anniversary in these shades:

The 10th-anniversary milestone is something special worth celebrating. You have been together for a decade, building your life and experiencing new things together. For an impressive gift, choose gorgeous daffodils that:

Silver and blue are associated with the 10th wedding anniversary, but daffodils commonly come in yellow, white, orange, and other warm shades. To bring in the silver or blue shades, choose a vase and accent that feature those contrasting colors to the warmth of this 10-year anniversary flower.

Choose a red rose bouquet to symbolize true love and passion. You can also choose forever roses that last for a couple of anniversaries after the 15th anniversary. Remember that the number of roses in anniversary flower arrangements has various meanings, so consider:

The symbolic material for the 15th wedding anniversary is crystal, giving you the perfect accompaniment to a bouquet of roses. Roses in a crystal vase will evoke beauty, tradition, and romance all in one gift. The vase is already a popular gift for the 15th anniversary, so including an arrangement of stunning roses elevates the token of your love.

After 20 years of marriage, you and your spouse have adjusted to your life together and settled into happiness. The daylily is another cheerful flower that represents a carefree nature. At this point, you’re comfortable with each other, and that stability has eased you into a carefree life. Celebrate how far you’ve come with daylilies, which come in a wide variety of shades, such as:

The 20th-anniversary flower features one color in the center and another on the outer halves of the petals — such as a sunburst of yellow in the middle and red on the edges. Some also have a stripe pattern that creates a blossom as bold as the love that you’ve achieved with two decades of marriage.

Not sure which color will make the best 20th-anniversary flower? Choose cream or white daylilies to fit tradition. Create a unique display using vintage china drinkware as a vase to fit the traditional material into your gift.

After a quarter of a century together full of growth, happiness, and wonderful shared experiences, you need to celebrate with an equally impressive flower. Iris has the feel of royalty with its often purple shade, reflecting the remarkable milestone of your 25th wedding anniversary. It also symbolizes:

In the past, the gift of irises was a token of deep appreciation, love, and sentiment. Choose specific colors to convey something in particular, like purple to evoke royalty, white for purity, or blue for hope. Whether you want to treat your spouse like royalty, convey how pure your love is, or express the hope you have for your future together, irises will send the right message.

With a quarter of a century of marriage between you, symbolic silver evokes the radiance of your love, so choose a vase that incorporates the radiant material or color.

Flowers for the 30th Anniversary

Lilies and sweet peas serve as 30th-anniversary flowers. Sweet pea symbolizes the lasting pleasure that you’ve achieved so far in your marriage and comes in soft, romantic shades of:

The shades of sweet pea flowers may appear in dual tones to create a remarkable bouquet that happily celebrates your 30th anniversary. Lilies also make perfect 30th-anniversary flowers because they symbolize devotion and come in a wide array of beautiful colors.

Because the color of the 30th anniversary is green, be sure to incorporate some filler into your bouquet of sweet pea or lily for that natural touch that represents how natural your life together has become.

You may not be as familiar with the 40th-anniversary flower, known as nasturtium. Nasturtium reflects victory, and with four decades of marriage, you have reason to feel triumphant. Select these flowers and offer a token with these qualities:

These delicate flowers look great spilling over the sides of a hanging basket, but they can also add a warm touch to flower arrangements. The large, textured blossoms of peonies contrast well with the delicate flowers for a vibrant bouquet. Display the arrangement in a ruby red vase to tie in the material and color of this anniversary.

Flower of the 50th Anniversary

The 50th wedding anniversary is an incredible milestone. With half a century together, you and your spouse want to celebrate with an arrangement of the best flowers for an anniversary. While a large bouquet of roses would be a classic gift, try something just as beautiful but a bit different with violets. Violets are gorgeous flowers than convey:

These flowers look somewhat like pansies, bringing your anniversary flowers full circle to the first year. Pansies are a bit larger than violets, so the 50th-anniversary flower is a bit more delicate, which you can contrast with the bold material of this anniversary.

Now that you know what to include in years of anniversary flower arrangements, find the perfect bouquet with help from Ode á la Rose. We offer same and next day delivery throughout areas in the Northeast and Midwest, bringing a breathtaking arrangement to your spouse in our signature gift box that keeps your anniversary flowers safe.

Order anniversary flowers today and find bouquets for every occasion in between. Celebrate every year your love blooms with elegant flowers and artful arrangements from Ode á la Rose.

We’re a unique flower delivery company. We offer same day delivery in the bustling neighborhoods of Manhattan, Chicago and Philadelphia, and next day delivery in most cities in the Northeast. This is our blog. 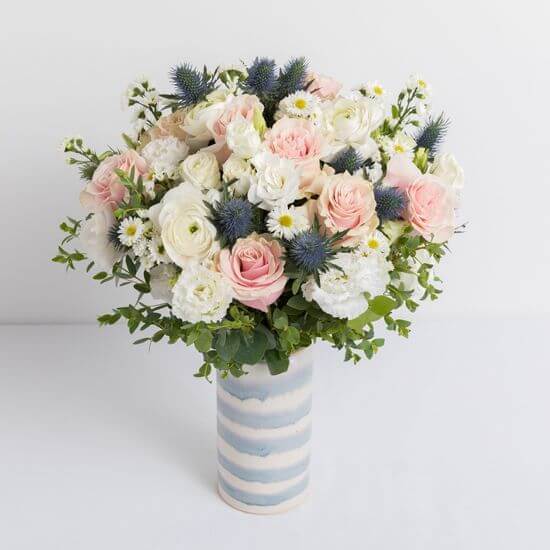 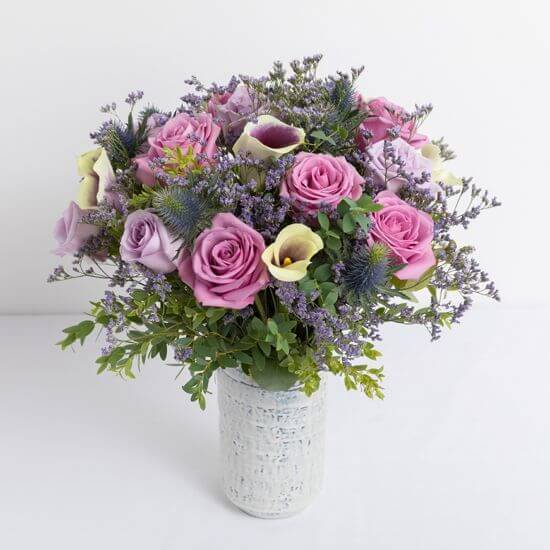 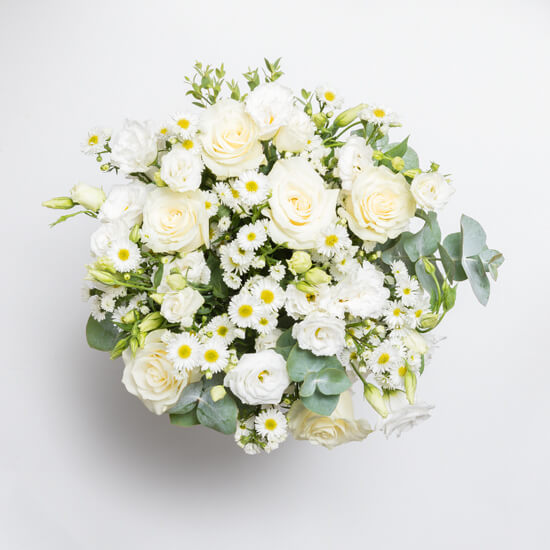 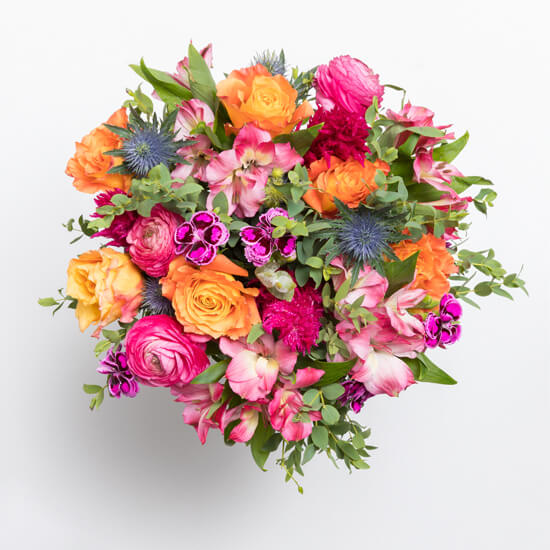